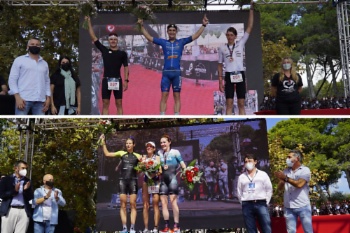 More than 1.300 athletes in an international event that closes the Challenge Family season

The European season of CHALLENGEFAMILY closed today 16th October 2021 in a big way with a world-class race, CHALLENGE PEGUERA-MALLORCA, the international half-distance triathlon. The event, once again, met expectations and the more than 1.300 people participating in the different events and their families and friends enjoyed a great sports day in Mallorca.

The day dawned with sunshine in Peguera and the 700 athletes registered in the queen test were preparing to enjoy an epic day of triathlon. The pre-race expectations were very good, the event had one of the most important professional team of athletes on the world scene. The race responded to those expectations and provided attendees and participants with a spectacular triathlon day. 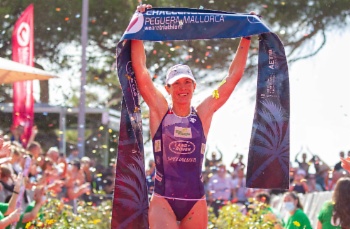 The women's race started at 9.03 a.m. on Torà beach (Peguera). The swimming was calm, with a calm sea and in ideal swimming conditions. Lucy Hall's (GBR) great swimming surprised everyone. She not only demonstrated her category sector's skills (pro female) but also managed to catch up with some of the professionals in the male category who had started 3 minutes earlier. Lucy came out of the swimming race in first place with a time of 25:31, one minute ahead of a large group that included Jodie Stimpson (GBR), Luisa Baptista (BRA), Imogen Simmonds (SUI) and Nicola Spirig (SUI) .

Hall got off the bike with a clear two-minute lead over her pursuer, Nicola Spirig. It seemed that the British would win, but Spirig quickly became a real threat. At the beginning of the third lap, the two riders were side by side and in no time Nicola Spirig managed to overtake Hall and quickly establish a gap of close to a minute. Hall paid for the effort in the cycling sector. Spirig won with a time of 4:14:43.

Spirig said she really enjoyed competing in front of the Mallorca crowd, on an island she loves. "I am very happy to have been able to combine a family vacation, a concentration and racing here. It is a great place, I really enjoyed the race and it is fantastic to get a victory. I had to give it all on the bike, as Lucy and the others were very strong, and then I came out very fast in the running race, so I struggled a bit in the second half, but it was a good challenge to race with Lucy! "

Link to the results: https://www.elitechip.net/index.php?zwshow=compdet&idcomp=7011240&compsec=clas 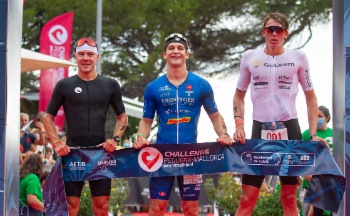 The men's race was a power struggle, the great cast of professionals that the race had managed to gather, brought a fight for victory.

The race started with a swim segment dominated by Sylvain Fridelance (SUI) and Noah Servais (BEL) exiting the swimming race at the same time, 23:43, closely followed by Collin Chartier (USA).

However, in the first steep rise in the cycling sector, the segment's specialists prevailed. Frederic Funk, Magnus Ditlev (DEN), Chartier, Nils Frommhold (DEU) and Gregor Payet (LUX) took the lead and picked up the race pace. Ditlev dominated the segment until a breakdown put him out of the race for a while. With Ditlev temporarily out of combat, the race turned into a battle between two German cyclists, Funk and Frommhold, exchanging positions by the event's technical, challenging and beautiful cycling circuit. Behind them, Chartier and Payet slightly lost the pace, allowing Ditlev to catch up.

Chartier and Ditlev entered T2 in third and fourth positions, about three minutes behind the leaders, indicating that victory would be decided in the running race.

Funk started the run at a dizzying pace and kept it going until the end, and thank goodness for him, as Chartier once again proved that he is one of the best in this segment.

Funk won with a time of 3:45:50, Chartier was a few seconds behind the victory, in second place, with a time of 3:46:29, while Ditlev showed that a breakdown would not prevent him climb to the podium, getting third place in 3:47:07.

"OMG I can't say how relieved I am!" said Funk. "Today I felt that I could show my potential. I felt very good from the beginning. I think it was probably the best half-distance performance I have ever done.

The race was very hard and it was difficult for me, but I could not let Collin catch me. Thanks everyone for cheering me on, today was a lot of fun. "

Link to the results: https://www.elitechip.net/index.php?zwshow=compdet&idcomp=7011240&compsec=clas 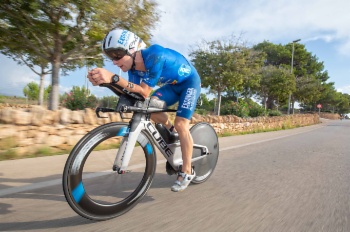 Challenge Peguera Mallorca is the last opportunity for professional athletes to score points in the Challenge Family ranking (and opt for important monetary prizes amongst the top ranked), since it is the last competition to take place on European territory.

This condition, together with the privileged geographical, climatic and equipment conditions that the municipality has, make this race an opportunity for athletes to conclude the triathlon season and take a break in a place of great tourist attraction. In this sense, it should be noted that Calvià has more than 300 days of sunshine a year, sea and mountain landscapes to practice all kinds of sports throughout the year and is located very close to Mallorca's international airport.

Challenge Peguera Mallorca is an example of institutional collaboration and private initiative. Organised by Fundación Calvià 2004 and Calvià Town Hall in collaboration with the Spanish Triathlon Federation, the event also has the support of the Balearic Islands Tourism Strategy Agency (AETIB) and the Fundació Mallorca Turisme (Consell de Mallorca ).

Other entities such as the Peguera and Cala Fornells Hotel Association, Challenge Family and brands such as Powerbar, Red Bull or Abus, amongst others that collaborate in the management of the event, also participate. 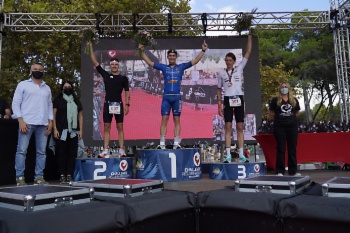 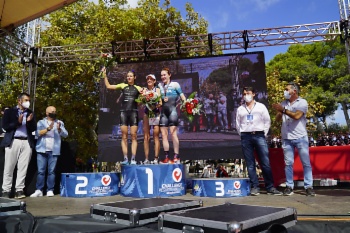 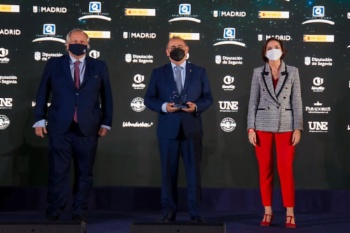 Q 2022 Award for the quality of the beaches 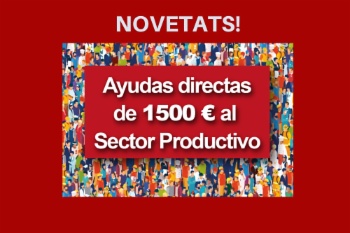 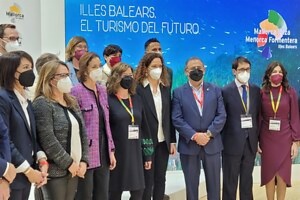 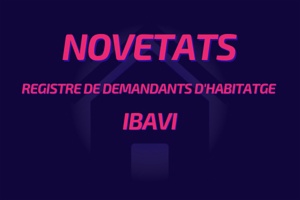